Home » About the little dramas

About the little dramas

Life’s Little Dramas crept up on me. I was very quietly getting on with my particular flavour of life and the threads of these stories started to weave together. I experienced a lot of love, I felt a lot of fear, I tried to work out how to be a boy, a man, a father and eventually, very recently, in fact less than one hundred words ago now, I found the courage to share my stories with you.

There was a time when I used to go with my friend Andy down to a bit of scrub land by the railway line in South Brent to look for lizards. We would try to catch them, sitting perfectly still and waiting for them to slink out into the sunshine before reaching out clumsily to grab at them. Andy had quick reactions and a natural aptitude for handling animals and he’d occasionally be quick enough to catch one and we’d pop it in a jar and inspect it with much fascination before regifting the poor creature it’s own freedom. I’m quite sure that the lizards didn’t appreciate this activity one bit but hey, we were kids and nobody had invented PlayStations so we had to entertain ourselves somehow.

There were many occasions when I had a lizard so close to me that I was sure I’d be able to catch it but I never could. Before I realised what was happening, my quarry would dart away under a loose stone just out of reach. Those lightening swift, evasive, beautiful little creatures have grown in my mind to represent something else that I have struggled to grasp hold of for all the intervening years. That something is Courage.

The idea of courage somehow evaded me as I grew up. Despite watching The Wizard of Oz, The Lion King, Star Wars and every other family film that preaches a courageous approach to life, I managed to tune out of the life affirming messages altogether and instead just went along for the ride, hoovering up every quotable line without once considering the greater meaning of it all. But that was when I was a kid and, as they say, we’re not in Kansas any more. Things have changed. The word courage has now become a great big flashing neon sign above my head. I still can’t quite reach it, but boy do I know it’s there.

I wonder, regularly, if it isn’t entirely misguided for someone like me (that guy, white, British, male, middle-class, middle-aged, straight, no distinguishing features, no celebrity, never been on Strictly, never even watched Strictly actually) to write this stuff at all, especially a collection of poetry! I mean what sort of person wakes up at 42 and thinks, what the world needs now is more rhyming couplets from the British middle-classes? But then I think, do you know what? I have a feeling that the things we share are more important than the labels that we give each other. Some things we share are tricky – Self doubt, irrational fears, lack of confidence, lack of self belief, fear of death, fear of loss, fear of failure, fear, fear, fear. You may know some of these things, but you may also know hope and love, the power of laughter and the feeling of the first warm spring sunshine after a harsh winter. Anyway, I hope and believe that there are many things that we share.

So before we get into the meat of the drama, I hope you’ll understand me when I say that these stories represent for me a great big lizard, something colossal like an Iguana or maybe even a Komodo Dragon. They are, for me, about reaching out and grabbing something that I never thought I could catch, letting go of all my (many, many) fears and anxieties and saying once and for all, be brave, have courage, it’s only a big deal in your own head. Enough procrastination! Enough! Please, just share the poems Richard! 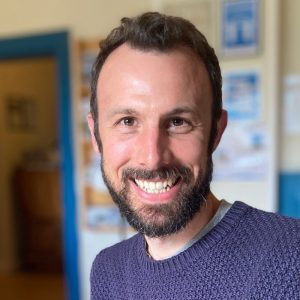 Life’s Little Dramas is a collection of poems written and performed by Richard Wain. Here he is with a great big grin on his face because he was in Iceland when the picture was taken and because he’d just eaten cake.